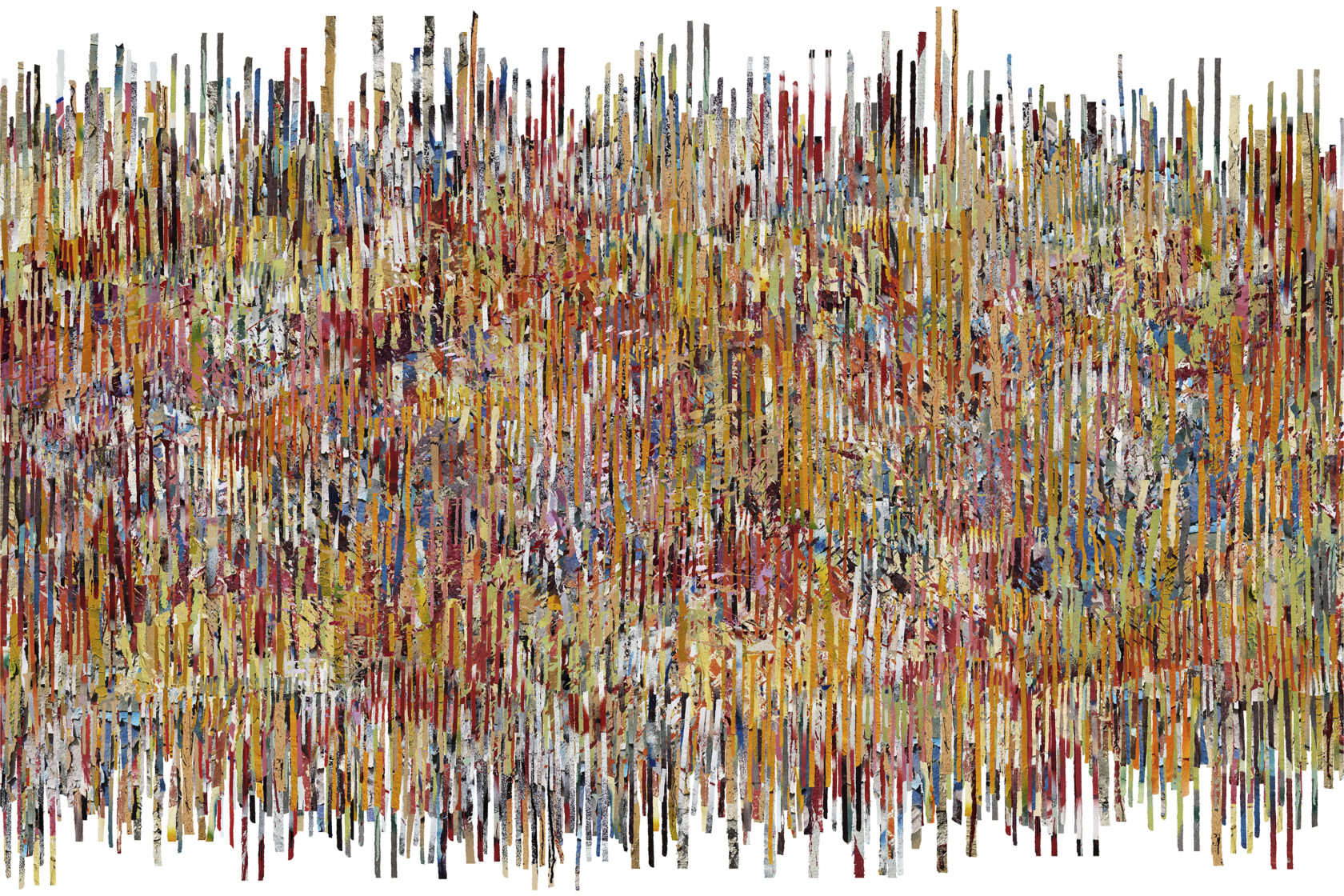 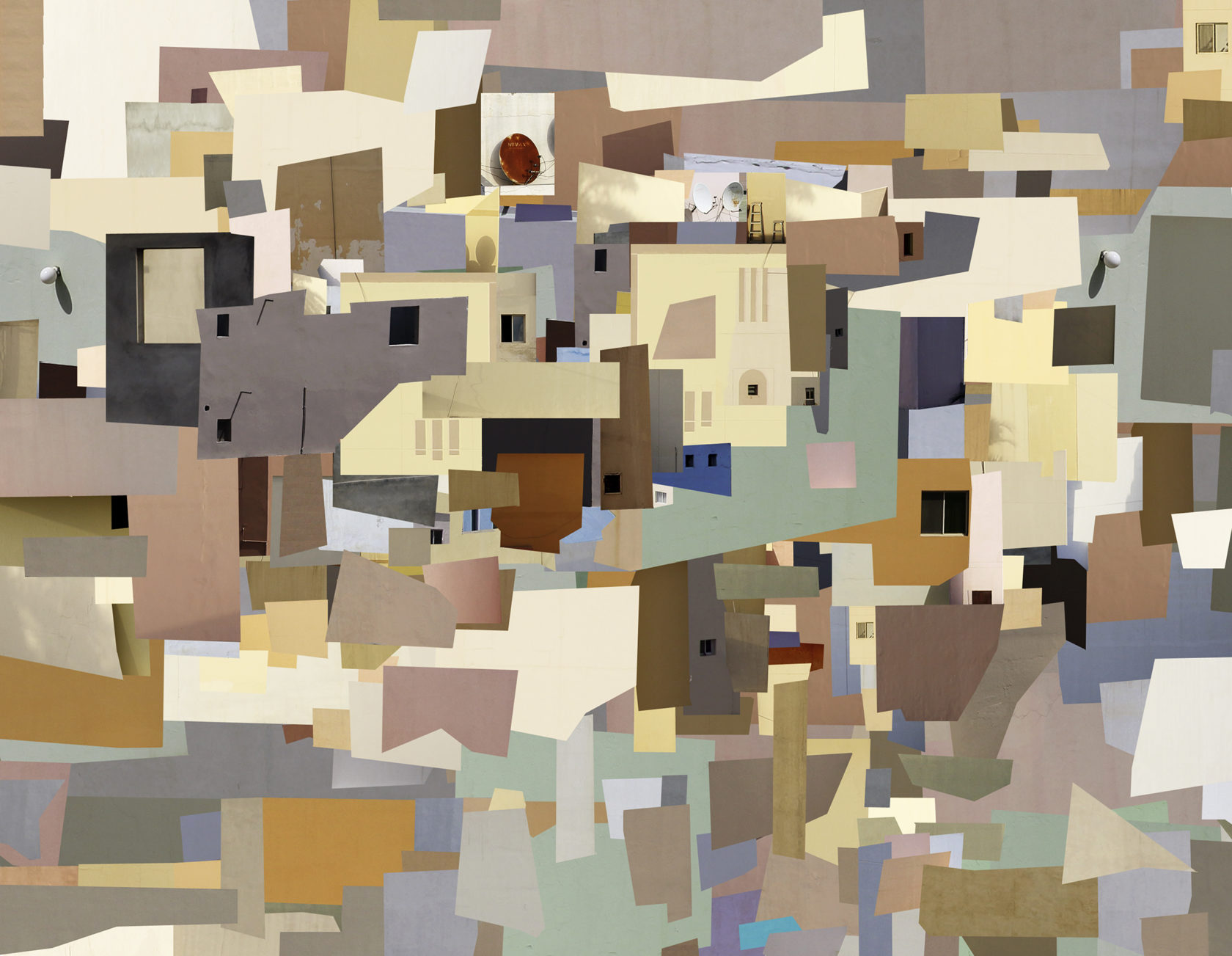 An enigma that is the very core of Sabella’s poetics: the photomontages and the declinations of the different units oscillate between alienation and hospitality; they become places of fantasy, joy and involvement – but also of detachment, fixity and individuality.

““..We present the photographic works of Steve Sabella, one of the greatest exponents of international avant-garde photography and until June 28th, we find him again in Turin, as the guest of the Metroquadro Gallery by Marco Sassone.”

2013 brought another change to Steve Sabella’s work. A visit to Bahrain to realize a work commissioned by the National Museum of Bahrain served as the spark for him to engage with his visual environment in a novel way… The resulting project Sinopia (2014) is markedly different from the earlier works; it abounds with a multitude of colors and forms, isolated individual components of images, abstract forms taken from the walls of houses as well as familiar sights such as satellite dishes, a kaleidoscope of the stunning landscapes and city views of Bahrain.

This new way of carefully dissecting the image appears almost surgical, and is in Sabella’s own words a reaction to what he calls people’s, “obsession with trying to rationalize photography’s indexical relationship to reality.” Steve Sabella seems to ask us to go further than this and investigate the photographic medium as the relationship between the image and the reality it creates, rather than reality as it purportedly depicts.

PDF
view on the IMEU

The Harrowed Hands of Palestine

Later sequences of work such as “In Exile” (2008), “In Transition” (2010), “Euphoria” (2010), “and “Sinopia” (2014) document Sabella’s increasing fascination with abstracting his photographs, layering and repeating images to create atmospheric but less immediately readable pieces. Some involve direct and challenging imagery — razor wire and brutal metal shapes — while others have a much more tender, personal feel. The abstractness, though, creates even here a sense of distance, as if a question is being posed. The viewer is also challenged by the complex relationship of aesthetic with content. In abstracting his images, Sabella makes barbed wire and the harsh metal technologies of exclusion and social violence somehow beautiful. Where do aesthetics and ethics meet in such a picture?

PDF
view on the Electronic Intifada

This Week in Palestine
April 2015

The cover exemplifies these layers. Bright bands in many colors fold over one another and wrap around the surface of the book. Upon closer inspection, their photographic composition becomes apparent. The title of the book, set in metallic foil, is barely visible on the cover, as if entirely consumed by the work itself. Later, the artwork from which these bands of color have been extracted will be discovered in Sinopia.

PDF
read on This Week In Palestine

Sabella moves beyond the surface of Bahrain to dismantle and reassemble his insights, building associations between diverse variables to construct new realities. The four works appear almost painted and question one’s perception of Bahrain as a location as well as presuppositions about the medium of photography itself.

Born in Jerusalem, Steve Sabella is a photographer whose portfolio depicts the challenges and struggles of the human condition in familiar yet abstract forms. As a Palestinian visual artist who has lived both under occupation and in exile, Sabella’s work brings into focus a sharp and sometimes uncomfortable view of contemporary life in the 21st century in a way that begs reflection by the viewer.

Throughout the book, Sabella’s images take us from one world to another. His fresh, early work leads to the pivotal series “Six Israelis and One Palestinian” and “Metamorphosis”, ending with the painterly, rich series “38 days of re-collection” and “Sinopia”. Sabella’s monograph stands as one of the very few records for those interested in learning more about contemporary art and artists from the Middle East to peruse and study.

Sabella superimposes the photographs and erases them, allows heterogeneous times in the layers and removals, which now actually rhythmize the image, contrapuntally, in the horizontal and the vertical, with no end in sight. The image lies on the wall like a tapestry…

The four works that make up the Sinopia cycle find forms of their own beyond the theme of exile that marks Sabella’s work up to 38 days of re-collection. “My exile is the backdrop of the epic scene,” we read in a line of Darwish’s poem “Counterpoint.” The displacement from Palestine is the existential basis of Sabella’s art. Irony, as a movement of indignation, carries his concept of the genesis of a picture. That movement harbors hope, not lament. Sabella’s work is borne by a movement of doubt; it binds the chasms of loss and helplessness into contiguous moments of sensibility and vulnerability that, in each work, throw the world into another order…

Sinopia enables both atopia and utopia—decisive placelessness and the possibility of a place—to sound. These lie close together in the syntagm of Steve Sabella’s work. Counterpoint prescribes the movement in the separation of possibilities, driven by a conviction of the necessity to grasp the artistic work as a form of riposte to injustice, aesthetic as freedom and as hope.

learn more about the monograph
purchase

Seeing and Unseeing Through Recreational Purpose

Sabella’s compositions veer from the surreal depictions of mirrored cityscapes and the iconic 400-year old Tree of Life, to highly deconstructed energetic painterly collages reminiscent of cubist and fauvist paintings. In one collage, the compiled facades of buildings make up a completely novel cubist and chaotic cityscape, with only windows, lanterns and satellite dishes as recognisable elements. It is as if Sabella has stripped his Bahraini images of their specificity in order to construct a composite image with layer upon layer of information.

At first glance, Sabella’s manipulated photographs from Sinopia appear curiously out-of-place amongst the other commissions, as they have such strong painterly qualities one wonders if they are photographs at all? Various, repetitive monochrome shapes are layered upon one another, creating a new world order of ambiguous architecture, with small identifiable elements, such as satellite dishes, windows and doors, give some reference point to the clandestine image. In contrast, a multi-frame rendering of Manama’s iconic skyline is at once instantly recognisable, yet Sabella’s technique once again is evocative of painting, this time more specifically watercolour, causing viewers to rethink not only their own presumptions about Bahrain, but also about the very medium of photography.

Steve Sabella’s photomontage features the same cityscape of which Abdul-Jawqad’s building is a part, also at a distance, repeated with its reflection. Standing alongside a similarly sleek work of the Tree of Life, Sabella grants the same aesthetic weight to the ancient tree as he does an entire city.